Stuck in a Moment

Author: Guardian Unlimited Newspaper 2006-04-25
Yang Fudong's video installations seem to have no beginning or ending, and the characters keep being waylaid. Adrian Searle is transfixed 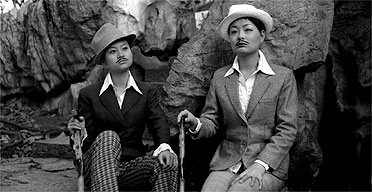 Lost in time: No Snow on the Broken Bridge by Yang Fudong, 2006


A man kneels on the ice of a frozen lake. His is not a happy situation. He is blindfolded and his hands are tied behind his back. Later we shall see him topple over. After that we shan't see him move again. Earlier he was on a horse, still bound and blindfolded, crossing an empty winter landscape toward his miserable end.

This is one of the strands of Revival of the Snake, a 10-screen video installation by Yang Fudong, at the Parasol Unit in London. One of five works in the Chinese artist's exhibition, Revival of the Snake is disturbing. As with all Yang's art, one is both captivated and bewildered by its progression of memorable images and inexplicable incidents. We watch a man chopping through the ice with an axe, a man standing in a field as a train goes by, a soldier waiting in a tree, watching. At night the soldier makes a fire and cooks a snared rabbit, firelight reflected in his face as he eats; by day he keeps his vigil, with only magpies squabbling in the trees for company. There's a group of people seen from far off in the scrubby brown landscape. Are they woodcutters, or on some pilgrimage? I've no idea.

The story seems to have no definite beginning, no conclusive end. It just starts, then stops. A great deal is condensed within its eight minutes, the whole thing measured out to the steady rhythm and beats of Wen Wei Wang's multilayered score. Eight screens line the walls of the room, with two more on either side of a freestanding wall in the centre of the installation. It is impossible to see, let alone follow, the 10 scenes unfolding at once.

The pulse of the music, and the ambient sounds of the work - an axe skating on the ice, crows and magpies, the rumble of the train, all coming from different parts of the room - suggest that the way to watch is to keep on the move oneself, circling the room to the walking-pace tempo of the score. I took a long, circuitous walk, on a floor lain with dull, reflective metal. Perhaps we are supposed to imagine that we too are walking on the ice, on our own journey.

What Yang's art adds up to is hard to define. Sometimes he overcomplicates his work, to a point where the result is unwieldy. The two-room installation Jiaer's Livestock, for instance, doesn't know whether it wants to be riotously comical, or gratuitous and cruel. It doesn't work, except as a series of beautifully choreographed fragments.

More often, though, the sense of lostness Yang creates is a good place to be. In the short, single-screen film Lock Again, there is a marvellous sequence in which two young men in sailor's uniforms - both of whom look as if they have been in a fight - ferry an imperious girl across a pond thick with duckweed in a rowing boat. The journey continues, in the next shot, across an indoor swimming pool, where they eventually flounder. Such unexpected turns are extremely engaging and pleasurable, even though they leave us floundering in our own incomprehension.

One might see his works as parables, or metaphors about modernity and tradition, or individuality asserting itself in mass culture. Heartache and yearning also have their place, and Yang appears unafraid of the nostalgic, the parodic, the theatrical and the enigmatic. He frequently makes reference to Chinese stories and film, to particular locations and to cultural stereotypes (the "intellectual", for example, whose badge of office is the briefcase he drags about with him), without entirely unpacking the references for his largely western audience.

One of the things Yang has said he wants to investigate is: "This state we're in ... a moment when we have to negotiate our past while inventing our present." He may be speaking about China - but we experience this on a personal level, too. Here lies his complexity and his accessibility, his growing artistic maturity and his importance.

Like our own journeys, the constant peregrinations in Yang's works are without arrival. They are marked by urgency and detour, waiting and emptiness. Rather than a story, his art is about a condition, an atmosphere, the unsolvable riddle and the inexplicable. In this way, his work is true to life. And true also to the way we sift our memories, recollecting, glossing and jumbling things together.

A new, hugely ambitious film, No Snow on the Broken Bridge, fills the large upstairs space. Eight screens arc round the room; this time, rather than walking, one sits on the carpeted floor. The exquisitely shot black-and-white film lasts 11 minutes, with different interconnected scenes playing at the same time. Sometimes an image flows across several screens at once - a boat crosses a lake, the white sky reflected in the black winter water, a play of mist, reeds and the dying stalks of water-lilies. The film takes place in a terrain of rocks, woods, esplanades by the lake, pavilions and ornamental bridges. It is a dream-like place, stricken by a curious, largely atmospheric inertia.

Neither the season (late autumn or very early spring) nor the period - the pre-revolutionary 1920s or 30s, or perhaps an alternative present that has arisen from a history that never happened - can be pinned down. The atmosphere switches between the melancholic, the sexual and the ascetic. Men wear trilbys, are monkish and self-importantly pensive. Women sometimes sport furs, sometimes mannish suits and painted moustaches. There's a girl in traditional dress who might be a man in drag. Uncertainty is everywhere.

The men seem to be on some urgent errand or quest, but are constantly waylaid by events, the scenery, or perhaps the atmosphere. Their earnestness appears to have been overtaken by forgetfulness. The women are sexy, coquettish, liberated and euphoric, caught up in what seems at times to be a sexual game among themselves. Characters form couples, only to lose themselves again. A goat appears, and a cockatoo on a perch; the characters are lumbered with responsibility for them for the rest of the film.

Like Yang's characters, the audience are lost in the middle of whatever narrative there is. As I watched, I found myself drifting in much the same way as the characters, the day, the weather. I was unsure whether time was flowing in a single direction, and had an uneasy sense that characters were somehow changing places with one another. Stories are not only a matter of plots, or of conclusions or denouements, any more than they are moral lessons or parables in fancy dress. Yang has talked about the dream-like quality of his work, but while dreams often shift violently from scene to scene, place to place, this is a consistent, suspended world. The men are crossing the bridge again, or climbing the stairs in the pavilion. The women are laughing, or swinging their legs as they sit on a branch.

At times I felt overtaken by these repetitions, but also uncertain whether each time I came to the end of the cycle of the work, something had subtly changed from the time before. Did that elegant woman really try to drag that recalcitrant goat along the path? Did the same man light his pipe at the same moment as last time? Like the figures who constantly climb the endless flight of stairs in an MC Escher woodcut, there seems to be something impossibly wrong with the envelope of time and space that contains Yang's characters. The music, a duet for piano and violin by Jing Wang, heightens the feeling that something is impending, some violence or other that will put a halt to all this to-ing and fro-ing. Of course, it never comes, and nor did I want it to.

Watching No Snow on the Broken Bridge is a little like watching a photograph appearing in a tray of developing fluid. It keeps revealing more of itself, without ever reaching a point of clarity. The photograph seems to be constantly evolving. It's a good place to be.

· No Snow on the Broken Bridge: film and video installations by Yang Fudong is at the Parasol Unit Foundation for Contemporary Art, London N1, until June 9. Details: 020-7490 7373, www.parasol-unit.org